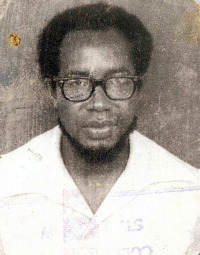 Even on Facebook, it is evident that Father’s Day is a much more complicated holiday than Mother’s Day! Days before Mother’s Day on Facebook, people asked their friends to change their profile pictures to honor their mothers and within hours, nearly all of my friends changed their profile pictures to pictures of their mothers. It was so cool to see the faces of the mothers that gave birth to my cyber family!

Days before Father’s Day, I noticed that some of my Facebook friends had changed their profile pictures to pictures of their fathers, but many others posted status updates about their mothers who were actually their fathers too because their fathers weren’t present in their lives. Some other Facebook friends praised the fathers of others while being tellingly silent about their own fathers. And even others ignited arguments about the contributions of fathers in general and specifically. What a dismal commentary about the collective opinion about fathers…

I don’t want to discount the experiences of many of my Facebook friends, but there are many, many, many fathers out there who are great fathers! And many of those fathers are doing it all alone!  In fact, here in Georgia, a recent report from the U.S. Census Bureau reveals that for the first time since 1970, the rise of families headed by single fathers surpassed the rise of households headed by single mothers! There was a recent article by Gracie Bond-Staples in the AJC about this surprising data.

Indeed, among the fastest growing types of households were those that include a father and kids without a wife, which were up some 45 percent, compared to those with a mother and kids but no husband, which showed a 35 percent jump.

Experts say the numbers reflect not only a shift in court and societal attitudes about child-rearing but women for whom motherhood has become less important.

And it seems that single fathers may be, in some ways at least, better equipped to take on parenting than single mothers.

Matthew Weinshenker, an assistant professor of sociology at Fordham University, said the state trend mirrors what’s happening nationally, where the number of single dads has almost doubled from 1.5 million to 2.79 million since 1990. In addition, those same census figures, he said, show single dads are older than single moms on average and have higher incomes.

Jim Higley, who recently won the title of “world’s greatest dad” in a national contest, said he regularly encounters people who seemed puzzled and intrigued by his decision to raise his children alone.

Higley, widely known as the “Bobblehead Dad” from his weekly parenting column in Chicago Tribune’s TribLocal, took over sole parenting responsibilities of his children about five years ago, when he and his wife separated and then divorced.

For instance, Mujahid-Alexander of Tucker, who shares custody with their mother of his 5-year-old son and 3-year-old daughter, said he had to turn down a swimming outing recently for his son because he didn’t believe he could watch both kids at the same time. And Kuklinski said he has had to give up a few dates.

Despite the challenges, they said giving up that place in their children’s lives was unfathomable.

“I grew up in a two-parent home. I have no concept of what it would be like without two parents and I could not see my children growing up like that,” Mujahid-Alexander said. “That wasn’t acceptable.”

With the recent retirement of basketball giant (literally and figuratively) Shaquille O’Neal, many sports fans have been recounting his many contributions to the game, but I remember when Shaq tried to ignite a rap career some years back. Obviously, he is a better baller than rapper, but I do remember his song “Biological Didn’t Bother” which he dedicated to his stepfather who raised him. Shaq also didn’t mince words about his disdain for his biological father….

Yo, yo, I want to dedicated this song to Philip Arthur Harrison
Word up, ’cause he was the one who took me from a boy to a man
So as far as I’m concerned, he’s my father
‘Cause my biological didn’t bother

Biological father, left me in the cold, when a few months old
A father’s child was greater than gold but I guess not
You brought me into the world but you’re not my dad
Mess around with those drugs makes my moms mad

I cannot dismiss the feelings of many who see Father’s Day as a day to reflect on the absence rather than the presence of their fathers, but I submit that many biological fathers do bother….Another basketball great Dwayne Wade recently won sole custody of his sons. Below is what Wade told the Associated Press after the long custody battle for his boys. “My life changed in a huge way,” Wade told the AP. “Mentally, I’ve been preparing for it for over a year now. To me, it’s bigger than that. For me, it shows a lot of people that you need to fight to be in your kids’ lives sometimes. You fight until you can’t fight any more. That’s all I was trying to be, a father in his kids’ lives.”

Wade’s words really blessed me this morning, and I thank God for blessing me with an extraordinary father! And Happy Father’s Day to all of the others out there! We need you, we love you, and we salute you!!!