2020 doesn’t mean what it used to. It seems like there’s nothing perfect about it. But this one thing I know. God is in control. Let me share a story about how I saw God’s hand intervene on a very imperfect night. (By the way, I have an exciting announcement for anyone who has ever dreamed of writing a book after the end of today’s post!)

It was a beautiful crisp February morning when Steve and I traveled from our college town of Chapel Hill, NC to Charlotte to announce our engagement to Steve’s family. The night before, God had decorated His creation with a dusting of snow and tipped the trees with shimmering ice sickles. All of nature looked as if it were dressed for a wedding ceremony. I was sure God had done this especially for me. Ice laden trees bowed their branches all along the highway as if to sing, “Here comes the bride.”

It was one of those Southern days that couldn’t decide if it was the end of winter or the beginning of spring. As the day wore on, the bright sun warmed the earth to melt the snow and de-ice the trees. However, by nightfall, the temperature began to drop.

Steve and I headed back to school about 7:00 that night. Just fifteen miles from the university, we approached a steep incline. We didn’t realize that the downhill side of the road was covered with a sheet of ice.

As we began our descent, our car hit the thin veneer and began to spin out of control.

“Steve! We’re going straight for that car,” I cried as we headed directly into a set of oncoming headlights.

Seeing there was nothing he could do, Steve took his hands off the steering wheel and cried out “Oh God! Help us!”

One second we were headed directly toward an oncoming car. The next we were sitting off the side of the road in a ditch, facing in the opposite direction. Our bodies were pinned safely back into our seats. We did not have on seat belts.

Shaken, Steve simply replied. “There’s only one answer to those questions – God.”

My mind immediately thought of Elisha and God’s heavenly army of protecting angels. Elisha was a prophet in the Old Testament who warned Israel every time their nemesis, the king of Aram, was about to attack. The king was enraged and demanded to know the informant’s identity. How did Israel always know what he was about to do before he did it?

“Elisha the prophet who is in Israel tells the king of Israel the very words you speak in your bedroom,” the king’s officers told him. So the king sent out an army of men to capture him. Listen to what happened when Elisha’s servant woke up the next morning and saw the King’s vast army surrounding them.

“When the servant of the man of God got up and went out early the next morning, an army with horses and chariots had surrounded the city.  “Oh, my lord, what shall we do?” the servant asked.

And Elisha prayed, “O LORD, open his eyes so he may see.” Then the LORD opened the servant’s eyes, and he looked and saw the hills full of horses and chariots of fire all around Elisha.” (2 Kings 6:15-17)

When God lifted the veil that separates the visible from the invisible, Elisha’s servant caught a glimpse of the heavenly host that stood armed and ready to protect them. And those same angels are protecting God’s children today.

In the natural scheme of things, there is no way Steve and I could have avoided having a head-on collision with the other car that night. But I believe there was nothing “natural” about the incident. It was the supernatural protection of God that reached down from heaven, picked up our spinning car, and gently sat us off the side of the road facing backward. If we had landed in the ditch facing forward, the sheer impact of a sudden stop would have ricocheted out bodies through the windshield. No, there was nothing natural about any of this.

And here’s one I’m singing today: “He’s got you and me sister, in His hands.”  I don’t know of any other place I’d rather be. And in that, you can place your trust.

Dear Father, Thank You for protecting me. Thank You for the angels that you assign to watch over me.  I can be at peace today knowing that my very life is in Your hands. In Jesus’ Name, Amen

What are you worried about today? Imagine taking those worries and cares and literally placing them in God’s hands. Read and meditate on the following verse: “Give all your worries and cares to God, for he cares about you” (1 Peter 5:7 NLT). 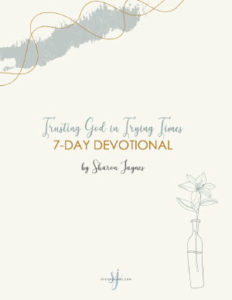 2020 has been quite a year! Want to learn more about Trusting God in Trying Times? Click here for a FREE copy of my 7-Day Devotional to calm your soul and reassure your anxious heart.

Also, check out the laminated prayer cards to help you learn how to pray Scripture for your husband and children.

Now for the special announcement. I’m partnering with Lysa TerKeurst as a personal book proposal writing coach to 10 writers in The Book Proposal Bootcamp. Here’s a little bit about it.

This wild 2020 year doesn’t have to go down on record as being one of your most non-productive years to date! We have book contracts ready to be awarded to writers like you! Click on the registration button or visit www.thebookproposalbootcamp.com to learn more.