As I was reading through the the fourth chapter of John, a certain man got my attention.  I pray that God would help me to be like this man! A nobleman, whose son was on the brink of death, came to Jesus and begged him to come heal his son. But instead of coming, Jesus simply said, "Off you go, He's better."

I'm not sure I would have been happy with that answer. It took a lot of faith to believe that his son was better when he couldn't even see him. What if he got all the way home again (and it seems he must have travelled some distance) and found out that he was still sick?

But what did this man do? He simply believed the word that Jesus had spoken unto him, and he went his way. And on his way home, his servant met him and said, "Your son's better." When the father asked what time his son had improved, he found out it was at the exact same hour that Jesus has said that he was better.

I admire this man's faith to simply trust Jesus' word. I like to see the answer before I'll trust and obey! But that's not the way it works.

How about you? Do you take God at His Word? We read God's Word in the Bible. Do you simply believe and obey it like this man did?

'Tis so sweet to trust in Jesus,

Just to take Him at His Word;

Just to rest upon His promise, 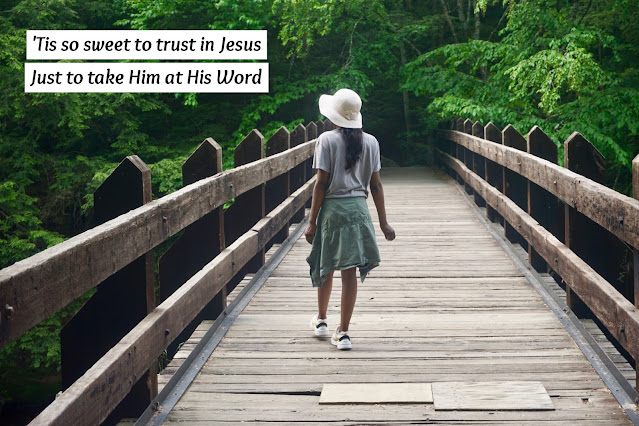