I’m writing over at Proverbs 31 Ministries today and I thought this might bless you too. Read to the end to see a picture of that little girl.

There I sat. Second row, middle. Front and center. Scared to death. I wasn’t scared of the camera. I was scared of life.

The day I found that picture of myself, I had been flipping through a childhood scrapbook my mom made. The pictures began on the day she brought me home from the hospital and continued through birthdays and Christmas mornings. But when I got to my kindergarten class photo, my heart stood still.

While all the other children sat straight and tall with big smiles that would make any parent proud, I sat slumped with my hand up to my mouth … biting the knuckle of my right index finger.

My hair was perfectly curled and my monogrammed dress crisply starched. I looked good on the outside. But on the inside, I remember wanting to disappear from the camera as insecurity and fear weighed heavily on my little-girl shoulders. My childhood home had not been a safe place.

The image of my slumped little body in that kindergarten picture reminds me of a woman we meet in Scripture. She, too, slumped — not because she wouldn’t stand or sit up straight but because she couldn’t. We find her story in Luke 13:10-13:

“On a Sabbath Jesus was teaching in one of the synagogues, and a woman was there who had been crippled by a spirit for eighteen years. She was bent over and could not straighten up at all. When Jesus saw her, he called her forward and said to her, ‘Woman, you are set free from your infirmity.’ Then he put his hands on her, and immediately she straightened up and praised God” (NIV).

While we might not relate to being bent over physically, most of us can relate to being “bent over” emotionally. We see feet … people passing us by, going about their busy lives. We see dirt … the mistakes we’ve made through the years. We see trash … the pain inflicted on us by others and, sometimes, by our own poor decisions.

We feel the weight of the world on our shoulders. Bent and bowed, perhaps because our race, ethnicity, gender, age, lack of physical ability, marital status, family history or financial needs become burdensome in our broken world.

I was emotionally crippled for many years. I listened to words from my past telling me I was “ugly,” “not good enough” and “worthless.”

Inferiority, insecurity and inadequacy were my three closest companions. I didn’t like these three lurking shadows, but they followed me everywhere I went. They stalked me, yelling taunts and accusations that no one heard but me. The more I listened to them, the more emotionally bound I became.

Then one day, Jesus called me out of hiding just as surely as He called the crippled woman to Himself in the synagogue in Luke 13. It was as if He placed His nail-scarred hand under my chin and lifted my head. He whispered to my wounded heart, Sharon, you are free from your infirmity of feeling less-than. Because of the finished work I did for you on the cross, and because of My spirit in you, you are more than enough to do what I’ve called you to do and to be who I’ve called you to be.
Click & Tweet!

And that’s exactly what He’s saying to you today. No more slumping in self-doubt or hunching in halfhearted conviction. Instead, you can stand up to the full stature of a confident woman who knows she is equipped by God, empowered by the Holy Spirit and enveloped in Jesus Christ. A daughter of Abraham by grafting. A child of God by choosing.

Is there something in your life that is crippling your spirit? Unforgiveness, bitterness, resentment, guilt, sorrow, worry, regret, comparison? Today is the day to cut it loose, cast it off, throw it away.

Whatever has been holding you back from lifting your head … Jesus has come to set you free! Lift up your head, dear sister. He has called you by name. You are His.

Dear Jesus, thank You for setting me free! Today, I choose to walk in that freedom and never be held captive by emotional chains again. In Your Name, Amen.

What is Jesus calling you to be free of today? Let us know in the comments. 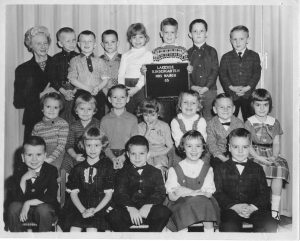 Can you find me? Smack dab in the middle. 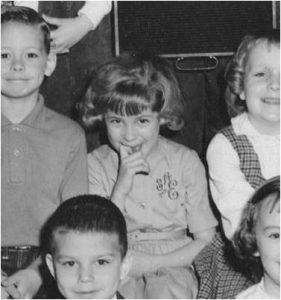 If you’ve ever felt less-than because of your past, your present circumstances or your gender as a woman, then Sharon Jaynes’ newest book is just for you! Never Less Than: Living Empowered, Esteemed, and Equipped When the World Tells You Otherwise is a message that you, your friends and your daughters need to hear. Learn more here.