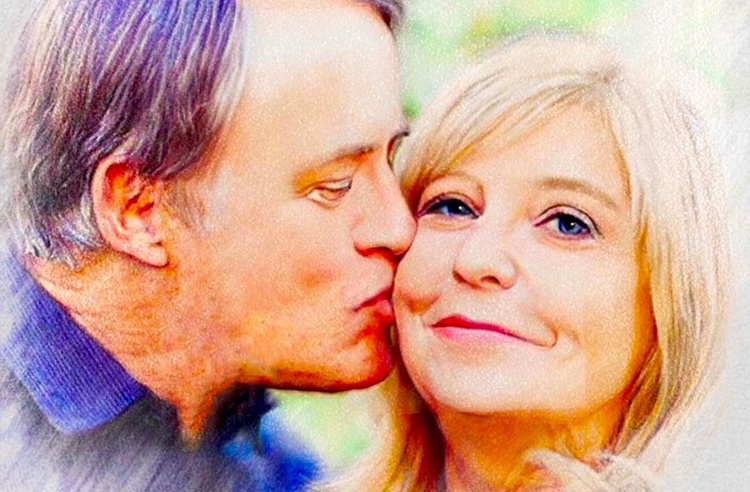 This week Nanci’s sister Donna initiated a conversation between my daughters Karina and Angela and me about the first weekend of NFL football. She rightly discerned how big last weekend would’ve been in Nanci’s life and how challenging it would be for our family. 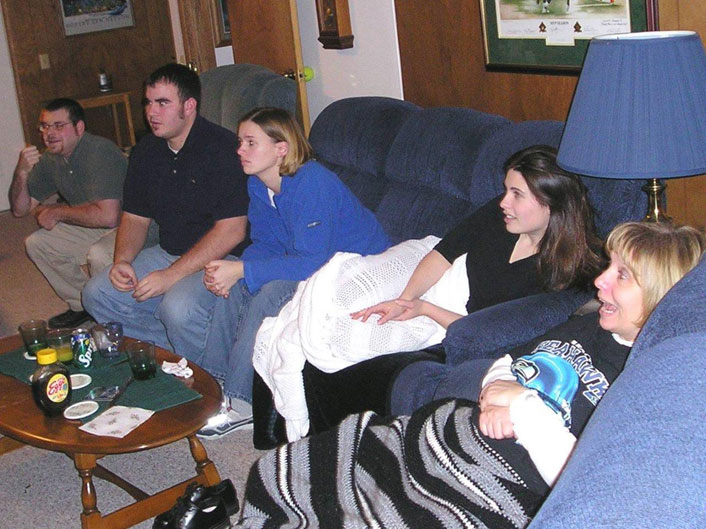 It was a tough weekend, tougher than I anticipated. The first game of the season was Thursday night. I was at our friends’ house where we always had Thursday night dinner and watched football together. People were talking and not paying close attention to the game (and that’s perfectly fine), but I thought if Nanci were there, she would’ve whistled loudly and said, “I want to watch this game!” Everyone would’ve laughed. Monday night I was watching with Angela and her husband Dan at their place (our grandsons had work or sports). It was a fun game, but without Nanci football season isn’t what it was. (It was WAY too quiet!)

I did a podcast this week with a man whose wife died three months before Nanci, and who has been studying the Heaven book. He broke down several times, and I was deeply moved also, and shared how difficult the opening NFL weekend was for me. He wanted to know what his wife was experiencing in Heaven now in contrast to what she would experience on the New Earth, and while I certainly don’t know all the answers, I do know that it in the resurrection, things like sports will surely exist because the resurrection will be a redemption and return to all the goodness of the previous life under the Curse, without any of the bad. Of course, that would include not only music and art and work and hobbies but also sports and all other aspects of culture—cleansed, redeemed, and devoid of sin.

I wouldn’t be at all surprised if Nanci was able to see the guys she knows and loves (along with their wives) from NFL conferences we have attended the past six years. She always cheered for and prayed for them as they played. It’s all up to God, but there are several passages that suggest people in the present Heaven can see things on earth. We might think surely those would only be the things that profoundly matter. Well, since we don’t cease to be human when we die, it might also include things we have a fondness for. I don’t assume that Nanci can no longer see our dog Gracie and some of her other favorite dogs (she had a lot of them). Maybe she doesn’t, but I wouldn’t be the least bit surprised if she does. When we go to be with Jesus do we lose our interests in our loved ones still on earth? Do we cease to care about our churches and the things that were fun for us, and our hobbies, sports, animals, and the wonders of the earth? I don’t believe Heaven is a place where we lose the old joys as much as see them redeemed and magnified.

In retrospect, I don’t know why I didn’t expect last weekend to be so difficult. Had it been Nanci’s birthday or Thanksgiving or Christmas, it would’ve made sense, and I would’ve known it was coming. And yet it makes perfect sense because she so loved pro football, and it was something we enjoyed together every weekend in the fall. This is where grief is unpredictable—it sneaks up on you and slaps you in the face. I’m reminded of what C.S. Lewis wrote in his book A Grief Observed: “I thought I could describe a state; make a map of sorrow. Sorrow, however, turns out to be not a state but a process. It needs not a map but a history.” 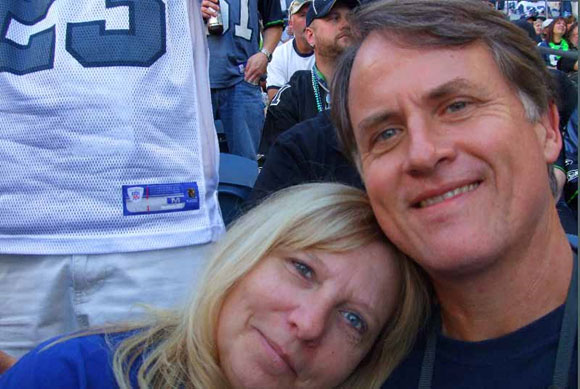 As I’ve told others over the years, there’s no right or wrong time frame for experiencing grief, and no neat and tidy “going through the five stages of grief.” And yet there was still such a warm feeling in my heart as I imagined Nanci with Jesus and wondered whether He let her watch some of her favorite players pull off some huge and unexpected wins. ️Or in other cases, be made more like Jesus as they experienced the disappointments of losses.

Our grief at the death of those we love is real and deep, yet knowing Christ transforms it. The Bible everywhere assumes that people will grieve. Job grieved unbearably at the loss of his ten children (Job 1:20; 2:13); so did the widow of Nain, who lost her son and received Jesus’ compassion (see Luke 7:11–13).

Men stoned Stephen to death. Before dying, he beheld Jesus at the Father’s right hand. Remarkably, Luke tells us, “Godly men buried Stephen and mourned deeply for him” (Acts 8:2). They mourned a brother who had died righteously and who in dying had seen his beloved Jesus! Don’t miss this remarkable point—knowing that Stephen was far bet­ter off being with the Lord didn’t keep his friends from deeply mourning their loss.

Clarissa Moll writes in Beyond the Darkness: A Gentle Guide for Living with Grief & Thriving after Loss:

The sorrow you feel after losing a loved one is so powerful and so life-shaping it can be personified. Grief is your companion.

…You may never have thought or heard of grief as a companion before, but I’m convinced we need this new paradigm of companionship for two reasons. First, we need words to describe how grief really operates in our lives. The longer we live with it, the more we discover that grief is persistent, all encompassing, and long lasting. It isn’t static but grows and changes over time. Envisioning grief as a companion allows us to release the striving and resistance that characterizes so much of contemporary bereavement. We can turn to our grief with compassion, listen to her sorrows, and learn from her wisdom. If you’re looking for progress, this is what it actually looks like.

Second, as we acknowledge, accept, and yes, even embrace grief, this unwelcome companion can offer us hope for the future. …Befriending our grief can be the key to finding flourishing again. Isaiah 53 tells us that Jesus would be “acquainted” with grief, a word that in Hebrew can be translated “familiar friend.” While we are busy trying outrun or heal or recover from our sorrows, Jesus invites us to a better way—not to avoid sadness but to befriend it. By gently companioning our grief, we can follow in Jesus’ footsteps.

…The idea of grief as a companion invites you to release expectations and platitudes that reflect a narrow gospel—a 2D flannelgraph version of death and resurrection that doesn’t take into account the complexities of living in a world that remains under the curse of sin. And with an experienced friend like Jesus beside you, can you step into a fuller story, one in which you can learn to trust God in new, intimate ways in the midst of your darkness, as you wait with hope for what is “not yet.”

God gave us grief as a way to express what is lost. For the bereaved believer, then, the task is not to dismiss this emotion… Instead, we can turn to grief, assured that God can offer grace through it. Knowing that God gave us the capacity for deep sorrow, we can use even this difficult gift as an opportunity to know him more.

As Clarissa explains, grief is a companion; but our greater companion and closest friend is Jesus. In Psalm 16:8 David says, “I have set the LORD always before me. Because he is at my right hand, I will not be shaken.” To set the Lord before me is to recognize His presence and His constant help.

I’ve told many who ask how I’m doing that I’m enjoying the presence of Jesus, who said to His disciples, “Now you are my friends, since I have told you everything the Father told me” (John 15:15, NLT). And I’m still learning to navigate life here without Nanci. It’s hard on some days, easier on others. I’m so grateful not only for Jesus’s Lordship, but also His friendship in this season. He has said, “Never will I leave you; never will I forsake you” (Hebrews 13:5). His presence helps me put one foot in front of the other, not with sense of drudgery, but with a sense of gratitude and comfort, knowing God is with me and is giving me strength.

Nanci is in the care of Jesus in a world without sin and suffering; I am in the care of Jesus in a world still under the Curse and afflicted with sin and suffering. I’m profoundly thankful that she does not have to come back to this world, and that I too will ultimately leave this world for one “better by far.” After the resurrection and final judgment (Revelation 20:4-6; 11-14), the present Heaven, which includes the New Jerusalem, will be relocated to the New Earth, to which God will come down and dwell forever with His people (Revelation 21:1-3).  Nanci and I and all who love Jesus will have the privilege and thrill of colonizing that redeemed earth together.

I’ll sign off this blog with the concluding words from Lewis’s The Last Battle, the final book of The Chronicles of Narnia, that have filled my heart since the first time I read them fifty years ago as a very young Christian:

And as He [King Aslan] spoke He no longer looked to them like a lion; but the things that began to happen after that were so great and beautiful that I cannot write them. And for us this is the end of all the stories, and we can most truly say that they all lived happily ever after. But for them it was only the beginning of the real story. All their life in this world and all their adventures in Narnia had only been the cover and the title page: now at least they were beginning Chapter One of the Great Story which no one on earth has read: which goes on for ever: in which every chapter is better than the one before.