Jacob is on his way back to his homeland. He has just gotten news that his brother Esau (who had wanted to kill him years back) is coming towards him with four hundred men. Jacob is terrified and worried.

This is when he prays this prayer. I see 6 things from his prayer than we can learn from (Genesis 32). 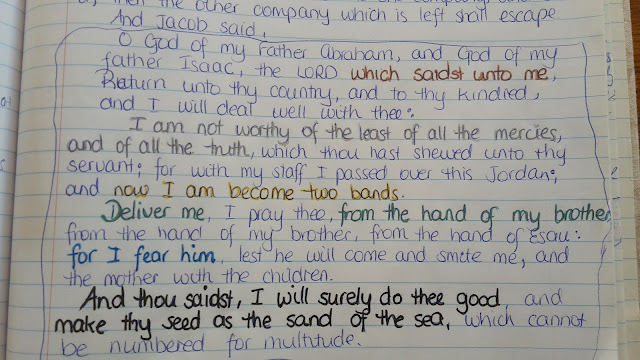 He’s coming to God in prayer after obeying Him. God had told him to return to his homeland. We can’t expect God to answer our prayers when we’re not obedient to His will. But if we are obeying Him, then we can have confidence that He will answer us.

He knows and admits that he deserves nothing. Neither do we.

He tells God exactly what his problem is. He asks very specifically for safety. We can also be very specific with God, if we want to see specific answers.

He is honest and tells God exactly how he feels and that he is scared that Esau will come and kill him and his family. We don’t need to be afraid to be honest and tell God our feelings and fears. He knows them already.

6. He reminds God of His own Word.

He pleads God’s promise to make his seed as the sand of the sea. We can also plead God’s promises when we pray. How can God deny what He has promised?