Can you recognize when you are being asked to relinquish your femineity? We live in a world where roles are confused within relationships. Back in the day, men could be trusted to lead, protect, and provide. Women were expected to help with the things that men could not do such as taking care of the home—cooking the meals, cleaning the house, doing the laundry, and doing other errands. The goal was for the couple to help one another to provide a stable home filled with peace and security.

Of course, peace and security were not always the result, but the willingness to work together not leaving everything to one partner is a pattern that helped marriages to last. Many relationships are so selfish; they cannot help but result in a one-sided relationship where one party takes on all of the responsibility for the home and the relationship. If the responsible party is a woman doing both the role of the man and the woman; she will grow to resent the man. Why? Because she has relinquished her femineity.

In relinquishing her femineity, she relinquishes the right to feel protected and becomes a protector. She relinquishes her right to feel secure and becomes security for the man. She gives up her right to receive as a woman and only gives until she is depleted and cold. This is not God’s will for women in a relationship. Both parties need to be committed to the goal of doing what is necessary to make the relationship work however that looks for each couple.

A Biblical example of a woman stepping out of her role as a woman to act like a man is found in 1 Kings. Jezebel went against her natural and God-given desire to be protected, secure, and loved fully by a man. Instead, she objectified herself by gaining a position solely off of her beauty. This beauty landed her the role of a queen to King Ahab. 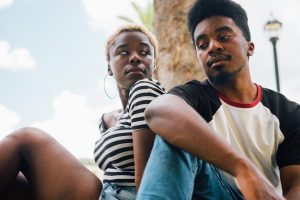 Ahab was a passive man, who was double-minded in his thinking. He was disobedient to the Lord and felled to carry out the things he was to do. As a King, instead of seeing how he could legally gain a field he wanted—he whimpered and complained to his wife. She then took things into her own hands using his authority as king to gain the field he wanted.

Women are typically socialized to be passive, but Ahab was passive. I don’t agree that passivity is healthy for men or women, but socially women are normally in a position of submission to a man because his manly integrity demands it. Ahab did not have that in him. He was not leading Jezebel. He was being led by Jezebel and she was leading in the wrong direction.
He did not stand up to lead spiritually following the Lord—although he was an Israelite. His passivity and lust caused him to seek out a woman who believed contrary to him. He ended up handing his kingdom over to this woman. She used the authority of the kingdom to pursue God’s prophets threatening to kill them.

A man who doesn’t care about what direction his life heads as long as he gets the booty is not in a position to walk like a King. He is also not in a position to lead a household in a healthy direction. That responsibility will simply fall on the woman and she will resent him for this if she marries him.

Don’t get me wrong. Some manipulative women willfully seek men out who operate out of a spirit of Ahab—relinquishing their responsibility as a man. Men will need to watch out for women who place their value and worth only in their ability to manipulate things by their looks.
A man should lead in three areas—spiritually, provision, and protection. If a man isn’t doing this for himself, with his family—sisters, brothers, parents, and friends; why would he do this with his wife and his household? Learn to look for fruit that the man you decide to commit to is willing to take on his responsibility.

Finally, this article is not to limit a man to a particular role all of the time or women. There are times in a marriage when a partner is stronger or weaker in an area and the other has to hold up the family and the spouse. For example, in sickness, this is the case. There are other examples of couples helping each other out to support a dream or a marriage business. These things are absolutely fine.

The issue is laziness, lack of responsibility, and a lack of fire to seek out the development necessary to become a man doing what a man is expected to do. No woman wants to feel as though she is in a relationship alone. If a man isn’t ready to take on the responsibility of manhood for himself and his future family; let him be.

Prayerfully, he will get it right at some point but do not lower yourself by doing for him what he isn’t willing to do for himself as a single man. Pay attention to see if he is following God well as a single man. Is he protecting the women in his life—his sisters, mother, friends? Does he respect women in general? Is he responsible in running his household—keeping up his bills, saving, and making wise decisions? If not, and he refuses to take the necessary steps of growth and responsibility, you may find yourself doing both his role in a relationship and yours too. You will only resent him becoming bitter and cold.

As a woman, you have a right to be feminine, feel protected, valued, and loved by the man you choose. You have a right to know the man you choose is really in it with you for the long haul. As a single woman, you have a choice to treat yourself with the love, protection, value, and worth you desire from a man. Remain under the covering of the Lord and those he’s provided in your life to remind you of your value and keep it moving when you cross paths with a man who simply isn’t ready yet in the ways we’ve mentioned in this article.

This content is published by Russelyn Williams of Intercession for A Generation on https://intercession4ageneration.org/.For more encouraging content & books on “Life & Relationship Lessons from a Biblical & Practical Perspective” please visit https://russelynwilliams.com/.