“When you pass through the rivers, they will not sweep over you.
When you walk through the fire, you will not be burned.” (Isaiah
43:2)

Have you ever felt that you just couldn’t handle one more crisis today?  Have you ever wondered how you will get
through the next several days, weeks, or months? 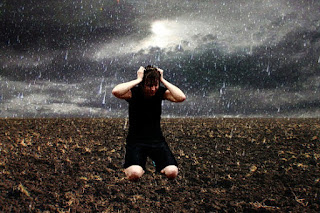 God knows the struggles of His people.  Through Isaiah, God assured Israel that He
had not forgotten them, even though they were oppressed in exile.

God reminded them of His power in the past,
and God pointed to His sure presence for the future.  The Red Sea had not swept over them as they
left Egypt (See Exodus 14), and in Babylon a fiery furnace could not burn
Daniel’s friends. (See Daniel 3)  God
promised, “You are mine,” and “I will be with you.”

The comfort in this passage is that God never lets go as we face
all kinds of dangers and struggles, and this is for God’s people both as a
group and as individuals.  Nothing can
destroy the people whom God has called, so we need not be afraid.

In the summer of 2002, while serving as a church planter in Alaska,
I was surprised by a diagnosis of Laryngeal cancer.  Shortly after that I was devastated by the
death of both my parents about two weeks apart.
Finally, in September of that year, my grandmother passed away just a
couple months short of her 102nd birthday.  For a while it felt as though the waves of
grief were too big to handle. But God did not allow me to be overwhelmed or
burned up.

Whatever you’re facing today, stop and pray that God would lead you
to the rock. Don’t get caught up in all
the bad news to the point that you forget where your faith lies.  As Peter was sinking during the storm, after
having walked on water, he called out, “Lord, save me!”  In Matthew 14:31, the Bible says, “Immediately
Jesus reached out his hand and caught him.”  The storm didn’t stop immediately, but that
didn’t matter because Peter held the hand of the one whom the wind and seas
obey.

If you’re overwhelmed today, call out to Him and take His hand.

Reproduced with permission from Russ Sharrock.