Welcome to Real Life. It (real life) is getting scary!

Don’t wake me for the end of the world unless it has very good special effects.

“Wow! These prices are crazy-high,” I commented to the woman standing in line with me at the cold-cut counter. “This inflation is scary.”

“Yes, it is. It’s biblical you know,” she replied.

No doubt, the last few years have been tumultuous with a pandemic, racial injustice, deep divisions in our nation and the church, an insurrection, war in Ukraine and the accompanying threat of nuclear war, mass shootings, and now runaway inflation. Is this biblical? Do these events signal the beginning of the end? Are these the labor pains that will give birth to the final seven years of life on this planet—the Great Tribulation?

I happen to be reading Revelation right now. It’s not an easy read. In his final years, the apostle John was imprisoned for his faith on the isle of Patmos. There, not only does Jesus Christ reveal himself to John, he transports John to the future where he reveals the coming judgments that will end this world as we know it.

In heaven’s throne room, God lifts up a scroll with seven seals. No one in heaven, on earth, or under the earth is found worthy to break the seals and open the scroll. That is, until the Lion of the tribe of Judah, the Root of David, the Lamb of God rises upon his throne. He alone is worthy! As Christ breaks the first four seals, he unleashes the four horsemen of the Apocalypse: 1) The white horse of conquest 2) The red horse of war and death 3) The black horse of runaway inflation, and 4) The pale horse of death by sword, famine, plague, and wild beasts. (Sounds a bit like today’s headlines, doesn’t it?) The fifth seal reveals the souls of martyrs calling for justice. The sixth seal unleashes a massive earthquake that turns the sun black, the moon blood red, stars fall, and every mountain and island is removed from its place. 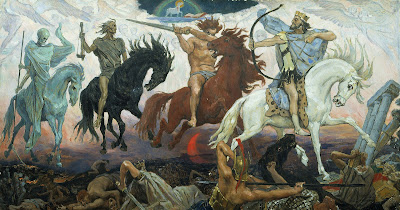 Four Horsemen of the Apocalypse by Victor Mikhailovich Vasnetsov

The seventh seal releases seven trumpet judgements. Many believe they describe the fallout of nuclear war. A third of the earth is burned. A third of the sea turns to blood. A third of earth’s fresh water turns bitter, and so on. Before the final trumpet sounds, God appoints two witnesses to proclaim his truth to mankind for 1,260 days. Then the seventh trumpet releases the final seven bowl judgments. Each bowl pours out a plague upon the earth.

But the end of this world is not The End. For as John watches, God unveils a new heaven and a new earth. “Look! God’s dwelling place is now among the people, and he will dwell with them. They will be his people, and God himself will be with them and be their God. ‘He will wipe every tear from their eyes. There will be no more death’ or mourning or crying or pain, for the old order of things has passed away.”[1] There will be no more pandemics, no racial injustice, no divisions in nations or the church, no insurrections, no wars or threats of nuclear war, no mass shootings, and no runaway inflation. Hallelujah!

He who was seated on the throne said,
“I am making everything new!”
(Revelation 21:3–5)

Is today’s turmoil the beginning of the end? Maybe. But whether it happens today, in seven years, or seven hundred years, the good news is—Jesus is coming! When he does, he will right every wrong, satisfy every longing, and wipe every tear.

“Look, I am coming soon!

My reward is with me,

and I will give to each person

according to what they have done.

I am the Alpha and the Omega,

the First and the Last,

the Beginning and the End.”

Dear Lord Jesus,
You, the Lamb who was slain, are worthy
To receive power and wealth and wisdom and strength
And honor and glory and praise![2]
We long to see your face
And walk the streets of your kingdom.
We love you, Lord.
Come quickly, we pray. Amen.

The Spirit and the bride say, “Come!”

And let the one who hears say, “Come!”

Let the one who is thirsty come;

And let the one who wishes

Take the free gift of the water of life.