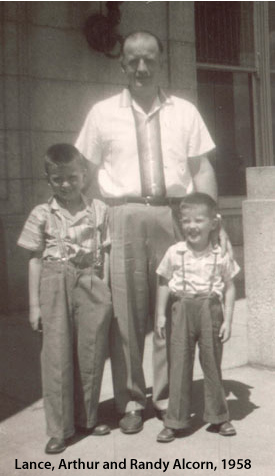 My father was the most resistant person to the gospel I’ve ever known. He warned me never to talk to him again about “that religious stuff.”

At age eighty-four, Dad was diagnosed with terminal cancer. One day he phoned, very upset.

“I’ve called…to say good-bye. I’m in terrible pain—I know the end’s coming. I’ve got a gun to my head. I’m sorry to leave you with a mess.”

I begged him to hold on. Jumping into my car, I made the thirty-minute drive in twenty, jumped out of the car, and pounded on the door.

Taking a deep breath, I opened the door. On the floor I saw a rifle and a handgun. Calling out for my father, I turned the corner into his room, prepared for the worst. Eyes half-closed, I bumped into him as he walked out. I rushed him to the hospital, where they scheduled him for surgery the next morning.

I arrived an hour before surgery, praying that in his pain and despair, with no easy way out, my dad would turn to Christ. Standing by his bed, I opened my Bible to Romans. I began reading in chapter 3. “‘There is none righteous, no, not one….’ All have sinned and fall short of the glory of God” (vv. 10, 23, NKJV).

Those weren’t easy words to read.

My tavern-owner father had always taken hot offense at being called a sinner. I wanted to gloss over this portion, moving quickly to the good news of God’s grace. But I forced myself to keep reading, verse after verse, about human sin. Why? Because, I told myself, if I really love Dad, I have to tell him the whole truth. If God’s going to do a miracle of conversion here, that’s His job. My job is to say what God says. We made it to Romans 6: “The wages of sin is death, but the gift of God is eternal life in Christ Jesus our Lord” (v. 23). Then Romans 10, about being saved through confessing Jesus as our risen Lord.

Finally I looked Dad in the eyes and asked, “Have you ever confessed your sins and asked Jesus Christ to forgive you?”

I’ll never forget that moment. The impossible took place right before my eyes: My father prayed aloud, con­fessed his sins, and placed his faith in Christ, just before they wheeled him into surgery. To me, dividing the Red Sea paled in comparison to this miracle.

The surgery was successful. God gave me five more precious years with my dad. The day I held his hand as he died, I knew I would see not only my mom, but also my dad in heaven.

That morning in the hospital I wanted to minimize the truth of human sin. I wanted to pass truth and go directly to grace. Yet without the bad news, there can be no good news. Without the truth of God’s holiness and the stark reality of our sin, Christ’s grace is meaningless.

The worst thing I could have done to my father was what I was tempted to do—water down the truth. It would have made it easier on me for the moment. But withhold­ing God’s truth from my dad would have been withholding from him God’s grace.