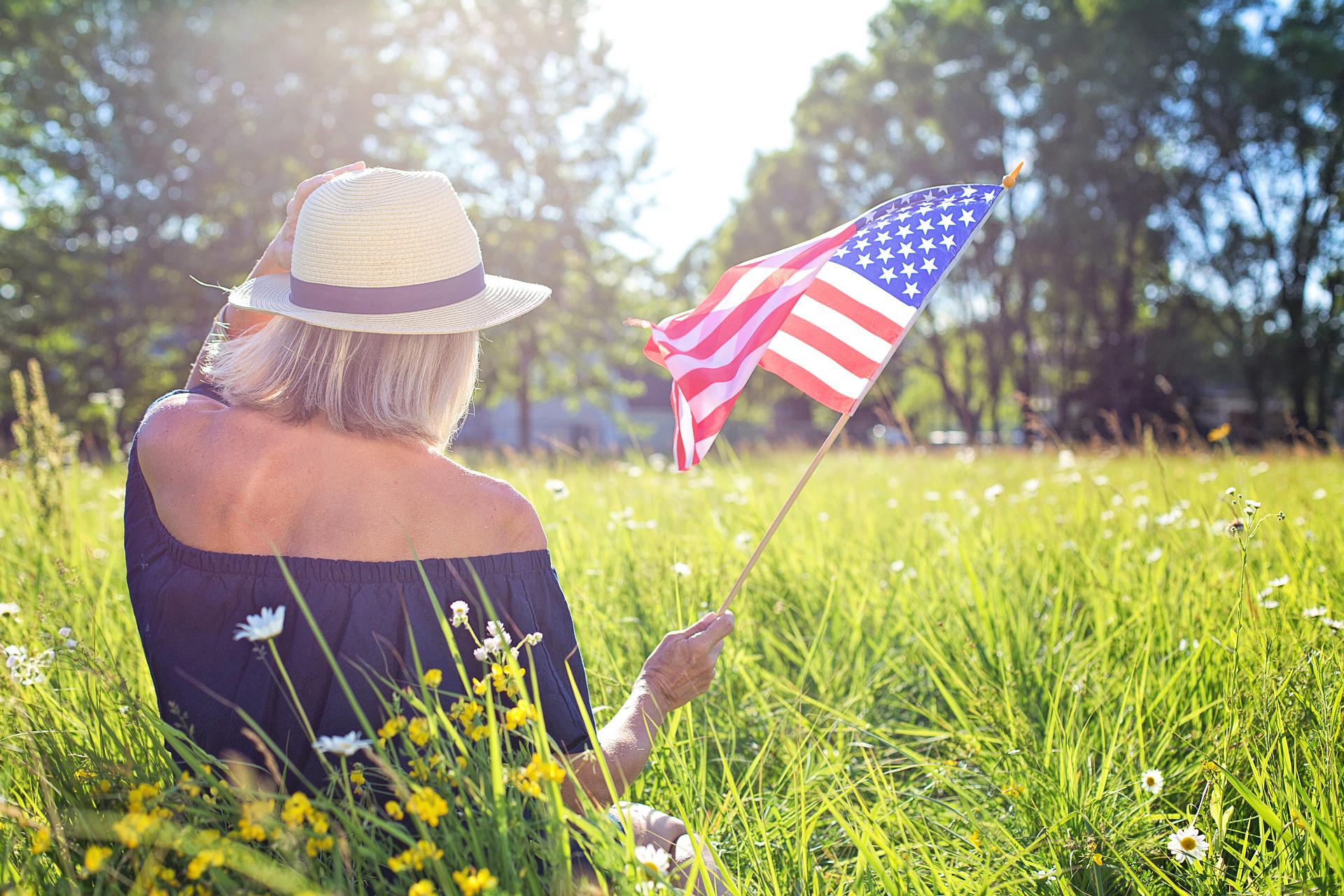 I am one of those people whose heart bleeds red, white, and blue.

I’ll never forget the first morning of kindergarten in September of 1960 when all the children in every grade gathered around our new teacher’s desk.  We placed our hands on our hearts and said the “Pledge of Allegiance” to the American flag that hung over her desk.

I pledge allegiance to the flag of the United States of America;

And to the republic for which it stands, one nation, under God, indivisible

With liberty and justice for all.

Although I didn’t understand words like “allegiance” and “republic” and “indivisible”, I knew what those words did to my heart.

Those words made my heart soar above the smallness of my life.

I knew in that moment that being an American meant something.

It meant something indescribable and indefinable.

It meant something bigger than me.

On the walls of our one-room schoolhouse in a nondescript town, located on no one’s map, were the pictures of the heroic men who had ruled this great nation.

Beside the door of the only classroom in that one-room schoolhouse was a framed copy of the Declaration of Independence.  When the year that marked the onset of my formal education began, I couldn’t read a word of such an intimidating document. But by the end of that foundational year, I knew exactly what it meant.

But I’ll get to that later.

My teacher, that life-changing year, was Mrs. Dombrowski, a war bride from Australia.

Her American husband had been a soldier fighting in the South Pacific during World War II. On one of his leaves to Sydney, Australia, he met an enchanting young woman who loved children, and he brought her back to America as his wife.

Although she had no children of her own, we became her brood of lively, teachable offspring, and our lives were richer for it.

She appreciated the freedoms that we, as little Americans, were given, and the power for greatness that America cultivated.

Mrs. Dombrowski was determined that we would come to know and love America as the great nation that it was.

She succeeded in my tiny soul.

I remember singing “My Country ‘Tis of Thee” and learning the meaning behind each simple line.

“My Country ‘Tis of Thee, sweet land of liberty, of Thee I sing.

Land where my fathers died, land of the pilgrims’ pride,

From every mountainside, let freedom ring.”

I learned the names of the men who served or died so that I could live in a free nation.

Patrick Henry, Paul Revere, and George Washington were not just names or historic figures to me … they were actual men who really lived and changed the world so that I could live a life of marvelous freedom.

Their lives called to me from beyond the pages of the history book, and I wanted to live like they did.

I wanted my life to matter to succeeding generations like their lives mattered to me.

A patriotic duty was birthed in my heart as I sat at the little wooden desk where hundreds of others had learned how to read and write and to do arithmetic.

As a 5-year-old in a classroom where other ages and grades were also being taught, I was the beneficiary of a rich and advanced education.  While I was copying my ABC’s, I was listening to the third graders learn about the Mayflower and the Pilgrims and why they came to America.

I was also eavesdropping on the fifth graders as they memorized and then recited the Declaration of Independence.

“When in the Course of human events, it becomes necessary for one people to dissolve the political bands which have connected them with another …

We hold these truths to be self-evident, that all men are created equal, that they are endowed by their Creator with certain unalienable Rights, that among these are Life, Liberty and the pursuit of Happiness …”

I learned that freedom isn’t free and that some things in life are worth fighting for.

I learned that greatness is a choice that common men and women in every generation must make.

I learned that when life is not fair that heroes are brave enough to take a stand for justice and for righteousness.

I learned that it is not easy to be an American hero or heroine but that it is honorable and bold.

I learned that simply being an American is a rare and cherished blessing in a world filled with Communist regimes, unfair prejudices, and archaic mindsets.

A love for America filled my heart during that year, and it has influenced the woman I am today … over half a century later.

It is not a perfect nation, but it truly is the land of the free and the home of the brave.

Those who have paved the way in American history have given me the precious gift of freedom.

Bravery, however, is something that I must choose for myself.

And so today, I choose to be brave for those who are coming after me.

I choose to sing a brave song … to do a brave kindness … to take a brave stand … and to live a brave life.

I may never be called upon to fight on a foreign shore, but I will indeed fight for those things that I believe in.

And … finally … I will pray a brave prayer.

I will pray a prayer that brings me to my knees and causes me to focus the gaze of my life, not on this temporary nation, but on an eternal God.

Stand beside her and guide her through the night with a light from above.

From the mountains to the prairies to the oceans white with foam,

Thanks for listening to my heart this week.  As you know by now, my heart is truly not a perfect heart, but it is a heart that is filled to overflowing with gratitude for the life I have been given and for the people who walk with me.  And, it continues to be a heart that is relentlessly chasing after God and all that He is!

Used with permission from carolmcleodministries.com.