Martin explains: “It is a movement of God without outside influence, without interference from the West. There was simply a man who was touched by God’s Spirit with a vision for Thailand. The Lord put me in touch with him and he wanted to plant Thai churches. His movement was just beginning and when I told him about all the villages in Thailand that had not yet been reached with the gospel, it clicked right away. From then on, many new churches were started.”

‘We don’t bring religion, but Jesus’

“When we go to villages we don’t bring religion but Jesus. We simply say: ‘Do you have a problem in your life? Then Jesus can help you.’ We ask them to bring two or three problems to Jesus and believe in Him. They already believe in all kinds of gods, so that makes it easier. For example, there was a well-to-do woman who wanted a new television set. She prayed for it but was freed from her alcohol addiction instead. She told everyone that she was now no longer buying booze and could buy a TV from the remaining money!”

“We bring them Jesus and within 48 hours we begin to disciple them. We revisit them and teach them how to pray. Simple prayers before meals and children’s prayers. Then a week later we come back and tell them who Jesus is, that He is the Creator of heaven and earth. Another week later we tell about the problem of the Fall. But very slowly, step by step. Within six months they are able to tell others about the gospel in this way. It gives them a good foundation. This takes place within house churches, a safe place to raise newborn Christians.”

“One of our church planters, believe it or not, still leads prayers in a Buddhist temple. He himself is not a Buddhist but a church planter! The church planters go to new villages every day to tell people of God’s love. When you do that every day many come to faith. We now have 500 people doing this. The goal is to plant 800 new churches this year.” 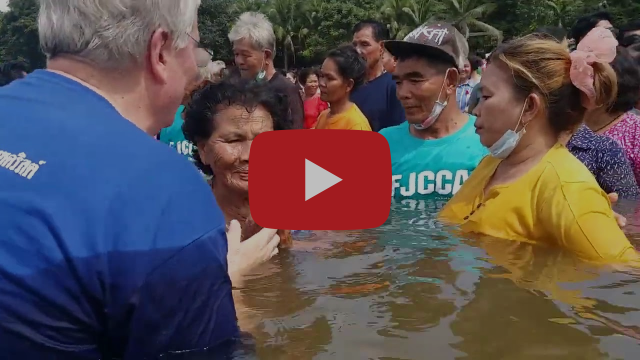 A mass baptism in Thailand with missionary Dwight Martin and his team of church planters. As many as 1,435 people were baptised. Click to watch.

Renewal Journal – a chronicle of renewal and revival:
www.renewaljournal.com